I like visiting Poland during Winter (Brrrrr!) and it was last year that I found myself sitting on a flight back from Gdansk. I was startled when someone hit my elbow – it was the air hostess who was conducting the usual pre-take off routine – checking if the seat belts were fastened.

Not long later, the familiar words came out:

“It is standard procedure to turn off the cabin lights during takeoff.”

This is no doubt a very important message. There were a few more lines after this one which were being completely ignored equally by the rest of the passengers. Some were sat engaged in their own private conversations, a few flicking through the in-flight magazine while others were either staring out of the window.

A few minutes late the Polish translation was delivered – it was equally lost in translation.

What’s the problem here?
No – Airhostess did not seem to be hardpressed for time.
Yes – The microphone was working perfectly.

So, what happened?
The Air hostess said exactly what people expected her to say in exactly the way people expected to hear it.
Result: Except a few paranoid flyers, everyone ignored herThe Air hostess “Tone of Voice” – presumably something that has developed (not just in Poland) over decades in commercial flying is very strongly embedded in how they speak. I am pretty sure I heard a comedian mimic it at Edinburgh Fringe Festival. He said it was uncanny how the tone of voice is consistent across all carriers – they must have come out of the same school!

The importance of creating and maintaining a consistent, clear brand tone of voice cannot be understated.

Ask yourself:
Would you listen had the air hostess used her own personal tone to delivermessage as opposed to an expected one?
Would you whip out the wallet to empty out the złoty if she had delivered the duty free tat with charm and wit?

Then again, it is a personal choice.

I heard during my Accenture orientation that an average Londoner is subject to over 1000 advertisement messages a day – they retain under 10. I appreciate it is tempting to adopt how other brands in the same vertical talk – but if a brand truly wants to stand apart, it cannot give users a chance to blur the lines between their message and 1000+ other messages they receive.

Equally, the worst thing a digital project can do for a retailer is spent months spending budget delivering a message in a tone that will be completely ignored. Can you think of an example where a brand used humour (different from others in the same industry) to engage with their customers? 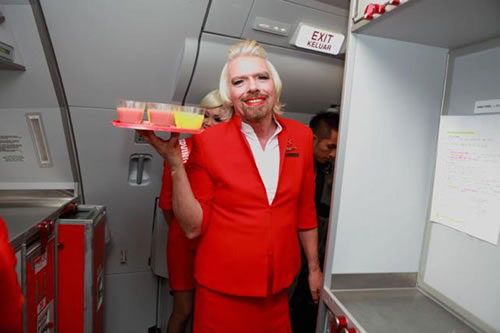 Retailers, establish your brand tone. Do not be just another air hostess.

Food for thought:
1) English Air hostesses does safety announcement in different accents and passes a few funny comments. What is its digital equivalent?

2) I heard that South West Airlines have introduced rapping their safety announcement. What is its digital equivalent?

4 thoughts on “#Digital Lessons learned from a Stewardess”